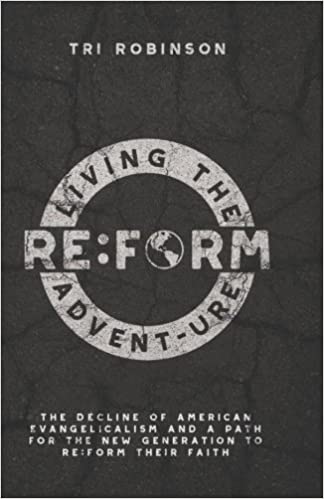 I came across this book a few months ago when a ministry associate brought this book up in a conversation about the future of the church and what a church native to the Millennial generation would look like. Intrigued, I picked up a copy and was excited to hear from this ministry veteran about what he sees coming up next. On the whole, I enjoyed the book, but I would be hard pressed to say that it felt revolutionary to me. Robinson writes this book in three parts: the first is largely a biography of his experiences in the Jesus People movement and what the last major revival looked like. Next he unpacks how church as it presently operates is in a dissolution process. Last, he offers his reflections on what a church that appealed to Millennials more deeply may look like.

There were parts of this book that I really enjoyed–actually some of my favorite elements were the biographical components which offered an "insider window" into the Jesus People movement. When it came to the second and third parts, I found myself less engaged. The section about Church unraveling probably stood out as a prophetic call before the last three years, but in the post-COVID reality, it didn't come across like a prophetic summons to change so much as making a case for what is obviously true. This speaks to Robinson's credit: his prophetic call was accurate! Unfortunately, that accuracy makes the book come across a little dated now.

The sections about the future shape of the Church were less than gripping for me as well. I was really glad that Robinson comes across clearly as a boomer that believes in the next generations (a refreshing change from what feels more like a consistent critique) What it was lacking, in my opinion, was that Robinson doesn't seem to suggest anything of deep change. The solution offered is a kind of "rewrapping" the Church with a more Millennial-friendly set of values (a higher dose of social justice and environmental work), rather than the deeper & more fundamental overhaul that I believe is needed (see for example my recent article, From Organization to Ecosystem). I think Robinson is headed the right direction, I'm not sure he's imagining a change fundamental enough to capture the hearts of the next generation. I suppose time will tell as we watch whatever God is doing next!

People looking to explore the idea space of future shapes of Church.

Did you find this book review helpful? Do you want to share it with a friend? Just use these buttons to share to any platform you can think of!