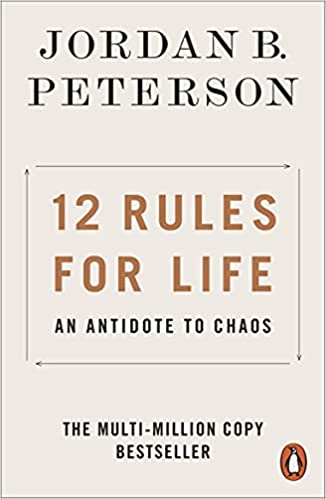 12 Rules for Life
Jordan B. Peterson

I picked this book up because I've been working to catch up with Jordan B. Peterson and his role as a public intellectual in our society. A friend of mine connected me to his The Psychological Significance of the Biblical Stories series and I decided to read his books as well. This is the first one I tackled and on the whole I found it really enjoyable.

Now, I think it's important to be clear about something up front–and this is something he is clear about as well. Peterson is not writing as a Christian voice in this book, he is writing as a public intellectual and drawing from biblical stories as he does so. That being said, Peterson also mixes in quite a bit of evolutionary theory and references other religious traditions as well. As long as you're willing to accept where he comes from: a public intellectual who is drawing off of Biblical stories for their psychological significance and value, I think you'll find this a good read.

Peterson is a careful and very well-read reader. He will frequently quote a range of philosophical thinkers, from Nietzsche to Solzhenitsyn to Freud and beyond. He not only references them, it's clear he's understood them at a deep level. He draws off of deep and profound thinkers and refracts his findings back against wisdom traditions, most frequently the biblical texts, and synthesizes principles for living. Peterson's bias is always towards responsibility and action, and I appreciate that about him and his writing. His call is to sacrifice, to "shoulder the burden of Being" as he calls it and I think that is an important call for our society today. I can see why he's popular.

As a bonus, I really enjoyed how casually he refers to dreams or visions from time to time in this book. Perhaps that feels less out-of-bounds as his academic field is psychology, but I was surprised by that. This dude is totally a prophet and I don't know if he even knows it at all.

Anyone wanting to push their thinking about principles for living to a deeper level ("coal-miner deep" as my good friend Clay Harrington often says), as well as anyone wanting to track with whoever is presently an influential public intellectual in our society.

Did you find this book review helpful? Do you want to share it with a friend? Just use these buttons to share to any platform you can think of!